Father Rob Sutherland, who is also an Australian Army padre, heads up this initiative, which enables us as a parish to assist men and women deployed on active service recover from Spiritual Wounds of Combat.

Here at St. John’s we have a long and distinguished link to those who have fought in war.  In the first two World Wars, men were recruited from local areas.  This meant that men fought alongside others they had usually grown up with or at least knew.

At the outbreak of WWI the local Battalion was the 18th.  This unit fought with distinction from Gallipoli to Pozières.  The Battalion Cross which stood at the cemetery at Contlemaison some 2kms south east of Pozières.  At the end of hostilities, this cross was brought back to Australia and placed in our chapel. The Battalion colours were also laid up. 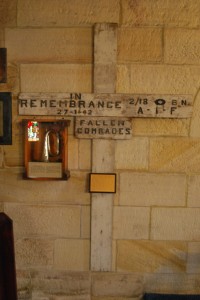 At the outbreak of WWII the Battalion was reformed, and as it was the second time it was raised it was given the nomenclature 2/18.  This unit fought with distinction in Malaya, inflicting one of the first defeats on the Japanese.

The unit had to retire to Singapore where the men went into captivity with the fall of Singapore.  The men were brought out of the camp to bury the dead from the battlefield and to de-mine the area.  They erected the second cross for the battalion members.  At the conclusion of hostilities the cross was removed back to Australia and erected in the chapel. 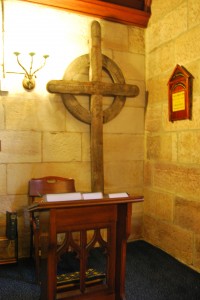 A number of Rectors of the Parish have also served in the military either as chaplains, or in our former Rector, then-Father now-Bishop Keith Dalby‘s case, as a regular service member with the Royal Australian Navy as a Submariner. In 2019, Father Keith was elevated to the post of Bishop of the Diocese of the Murray.

Our longest serving Rector, Father Roy Wotton OAM (1950-1979) served as an Army Chaplain in PNG in WWII.  He personally buried some 400 diggers on the Kokoda Track.  His Communion set which travelled with him on the Track is kept in the church.  Father Roy died in 2013, just short of his 100th birthday.

Father Rob Sutherland CSC (2001-2004) was an Army Officer, later an Army Chaplain and, until his retirement in 2022, Archdeacon for the Army division of the Australian Defense Forces.  Fr Rob has been to the Afghanistan (three tours) and Bouganville among many other deployments as a Chaplain, and regular Army Officer. In 2014 Fr. Rob was awarded the Conspicuous Service Cross (CSC) for his role as Chaplain and his pioneering work here in Australia investigating the Spiritual Wounds of Combat.

Father Clive King AM , who is the Archdeacon Emeritus for the Air Force, is a member of the parish, retired as Assistant Priest here.

In 2007, just before the Federal Election the Chapel was dedicated to Defence Personnel in the presence of the Minister for Defence The Hon Brendan Nelson MP, and was conducted by Father Rob Sutherland.

These strong links serve us well to assist in the Warrior Welcome Home ministry that is vital to our Defence Force Personnel. 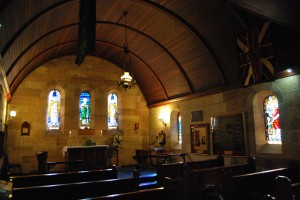 The First warrior Welcome Home was held at Q Station, Manly in September 2012, and had four participants, all Chaplains who had served in either Timor, Afghanistan or Iraq.  The Second Warrior Welcome Home was held in August 2014, and had eight participants.  This ministry has continued and expanded into other Australian cities.  At one Warrior Welcome Home dinner, Bishop Tom Frame launched the Father Roy Wotton Fellowship, which provides a bursary to enable the further development of our knowledge and treatment options for the Spiritual Wounds of Combat.  St. John’s also supports Bishop Tom Frame in his role as Director of the Australian Centre for the Study of Armed Conflict and Society (ACSACS).  This parish remains committed to supporting through prayer and the Warrior Welcome Home Programme our Armed Services Personnel.