For over one hundred years, faithful souls have worshipped and served Jesus Christ as Lord and Master in the fellowship of His church in the Church of England (now Anglican) parish of St. John the Evangelist, Gordon.

The site – said to be the finest piece of real estate in Gordon – was first used as a school in 1823, but it was not until 1872 that a church was built there.

The first church was built as a result of a petition sent to the Governor through the Bishop of Sydney by 36 local inhabitants.  Robert Pymble, William Henry McIntosh and John Brown were appointed trustees and the land was knocked down to them for 37 pounds.  The church was designed by Edmund Blacket and the foundation stone was laid on 26 October 26 1872.

The history of St. John’s has been recorded in several publications.  In 1923 a History of the Parish of St. John the Evangelist, Gordon, was written by Mr Henry Selkirk, FRAHS; to mark the centenary of the church in 1972 a history was published by St. John’s Parish Council; in 1997 the 125 Year History, edited by John C. Moon, AM, was published.  This latter publication incorporated a reprint of the centenary history.  Copies are available from the Parish Office.

The history of St. John’s cemetery, which adjoins the church, began earlier than the church itself, the first recorded burials having occurred in 1867.  Pioneers at Peace by Jill Lyons (Spurwood Press, 1994, ISBN No. 0 646 19503 4) relates the history of the cemetery.  A cemetery map and an index of burials and commemorations are included.

Together, these books provide a comprehensive record of the life and people of St. John’s which, towards the end of the 19th century, was the centre of ministry for the area from Roseville to the Hawkesbury and, early in the next, sponsored the establishment of churches at Hornsby, Roseville, Lindfield, Killara, Pymble, St. Ives and Turramurra.

You are invited to browse the following pages, containing information and some pictorial material on specific aspects of the history of the parish. 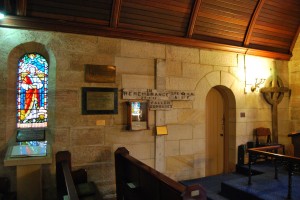 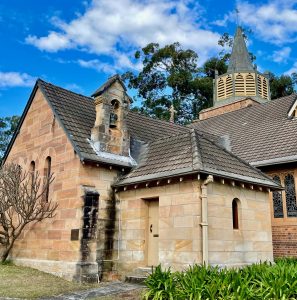 Before the opening of St. John’s Cemetery in 1867, if a person died in the vicinity of Gordon, New South Wales, it was necessary for the burial to take place on private property or at a cemetery at North Sydney, Ryde or Parramatta.

Since the opening, more than 1,200 people have been interred at St. John’s. The ashes of another 1,000 people are located in niches in the columbarium walls. 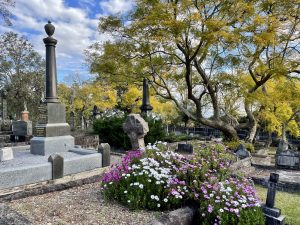 The first burial, on 8 May 1867, was that of Mary Ann Britton of Lane Cove.  Mary Ann was just twenty-seven years old and left behind a husband, John, and three children under seven years old — two daughters, Alice and Sarah, and a son, William.  John Britton later remarried.  Of the children, the girls both married and seem to have died in the Mullumbimby area in the 1930s, with William staying in Sydney.

The story of Mary Ann Britton and her family is but one of the many stories of those whose final resting place is St. John’s Cemetery.

The history of St. John’s cemetery has been written by Jill Lyons.  For further information click on the links below