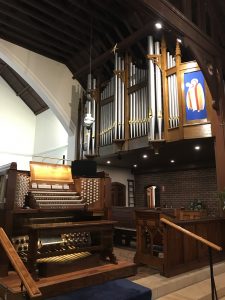 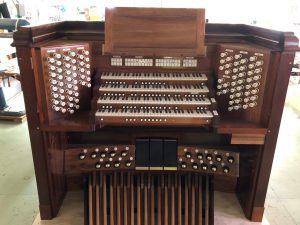 The new organ at St John’s Anglican Church, Gordon was built by the South Island Organ Company (New Zealand) and Stage 1 (chancel section) was completed in 2019.

Stage 1 comprises 2056 individual pipes ranging in length from 5 metres to just a few centimetres. These are arranged in 31 ranks (or sets) of pipes. This means it is not a large organ. In fact the North Shore includes larger instruments at North Sydney, Pymble and Lindfield; but the clever design of the St John’s organ enables musical flexibility and gives the feel and sound of a much larger instrument than it really is. It is achieved with organ building techniques called extensions and duplications, resulting in an instrument of four manuals (keyboards) and 55 sounding stops. This will enable it to play both traditional parish music in addition to some of the more complicated examples of choral accompaniment and organ repertoire.

The new South Island Organ Company organ at St John’s uses mostly historic pipework made by organ builders Norman & Beard, and the later Hill, Norman & Beard between 1907 and 1935, but there is one rank of new pipes which is a copy of contemporaneous pipes. Twelve pipes were retained from the previous St John’s organ.

The organ has fourteen separate chests (that house the pipes and supply them their air), and five reservoirs (that keep the air under various pressures). The blower (wind-providing motor) is housed outside the church building and is capable of providing 12 horse-power of energy.

The organ includes a number of elements that are firsts for Sydney, or are very rare. These include:

While none of these elements is new to organ building (J.S. Bach specified use of a Glockenspiel stop over 330 years ago!), we have been fortunate to have the opportunity to combine so many exciting elements at St John’s. The organ is already drawing interest from the community; for example, Trinity College of Music (London) and the Organ Music Society of Sydney are already scheduled to visit.

The new organ will provide many sound colours to enhance the liturgy of St John’s, underline the meaning of Biblical and liturgical texts that are sung, provide authentic performance of choral and organ repertoire, and musically excite worshippers and visitors to St John’s for years to come. 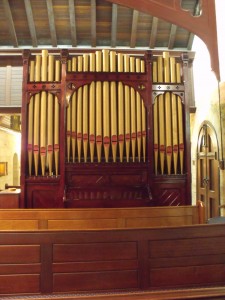 This organ was ordered in January 1882 by William R. Angus, a well-known amateur organist, of the carriage and coach building form of Angus & Son, which was then at 101-185 Castlereagh Street, Sydney. William Angus was organist at the York Street Wesleyan Centenary Chapel in about 1881 and then at All Saints’ Anglican Church in Petersham in about 1900.

No longer required by the Coptic Orthodox Cathedral, the Hill organ was moved to St John’s Lutheran Church in Wollongong in 1979. In Wollongong it was restored and installed by Brown and Arkley, and has been maintained by Peter D.G. Jewkes Pty Ltd for some years now. After several years of searching and inspection of several instruments, the Hill chamber organ became available and was purchased in February 2012 by the St John’s Music Association for use at Gordon.

The organ was Hill & Son job number 1810, and has a ‘deal case’ with non-speaking front case pipes. These were originally diapered in typical Victorian fashion, but at some stage the ears of the case pipes were roughly removed and the pipes painted gold with red mouths. It would be wonderful to restore the pipes and diapering at some stage in the future. Likewise, the timber panels that encased the lower section of the rear of the organ and the upper rear sides to the sides of the swell box were at some stage removed, and as the organ is free standing again, these would be usefully reinstated. These panels give some hint as to the instrument’s provenance as a house organ. Likewise, the flue stops lack the forthright tone often associated with Hill organs, but the reed is fiery and much stronger than typical oboe stops. All manual stops are enclosed in a swell box operated by a hitch-down swell pedal. This box is very effective and helps give the impression that the organ has more stops than it in fact has, offering a very gradual decrescendo with judicious use of stops and swell.

Despite the organ’s diminutive size, it bears all the hallmarks of many of Hill’s larger and better-known instruments. The key cheeks are typical, the pipe mouths are typical, and the solidity and complexity of the mechanism was attested in the amount of time taken for the organ’s reassembly at Gordon. The pipework is voiced with the skill expected of its maker. The Dulciana is beautiful and with the swell box closed reduces to an almost inaudible pianissimo. This can be accompanied by the uncoupled pedal bourdon which speaks so beautifully as to render the absence of a coupled 8’ stop irrelevant. The Harmonic Flute as the solitary 4’ stop rather than a principal is perhaps another hint of the organ’s first home, but is a delightful stop characteristic of the maker.

At some stage amateur builders tried to install a super octave coupler and tremulant using parts from a reed organ. These have now been removed, restoring the organ to its original specification. The compass is 54/25, the two octave flat and parallel pedalboard sitting in a different place to most in relation to the manual. There are two composition pedals.

It has the following specification.

Built by father and son parishioners originally for their home, this amateur-built instrument was placed at the north end of the gallery when they moved to the country, and by 1989 had been donated to the parish. It comprised mechanical components from a 1933 Leggo organ from St Joseph’s Convent, Lochinvar and ordered from Laukhuff in Germany, and pipework acquired from Arthur Jones of Walkers organ builders, the old (replaced) Regal rank from the Pogson organ at The King’s School, and three ranks from the 1940 Leggo organ formerly at Manly Masonic Temple (Gemshorn, Principal and one of the Gedacts). This organ was used for worship when the Rendall organ was out of action during the installation of its new console in 1986, but earned more fame when used in music for two organs with the Rendall in concerts by Graham and Enid Anderson in 1993. Constant unreliability plagued the gallery organ, and despite attempts by the donors to repair it, recommendations were adopted to remove it in 2001. It returned to the original owners’ home where it remained until after the father’s death and sale of the home. It moved briefly to another private home but was never installed and has since been broken up. Its last known specification was as below.